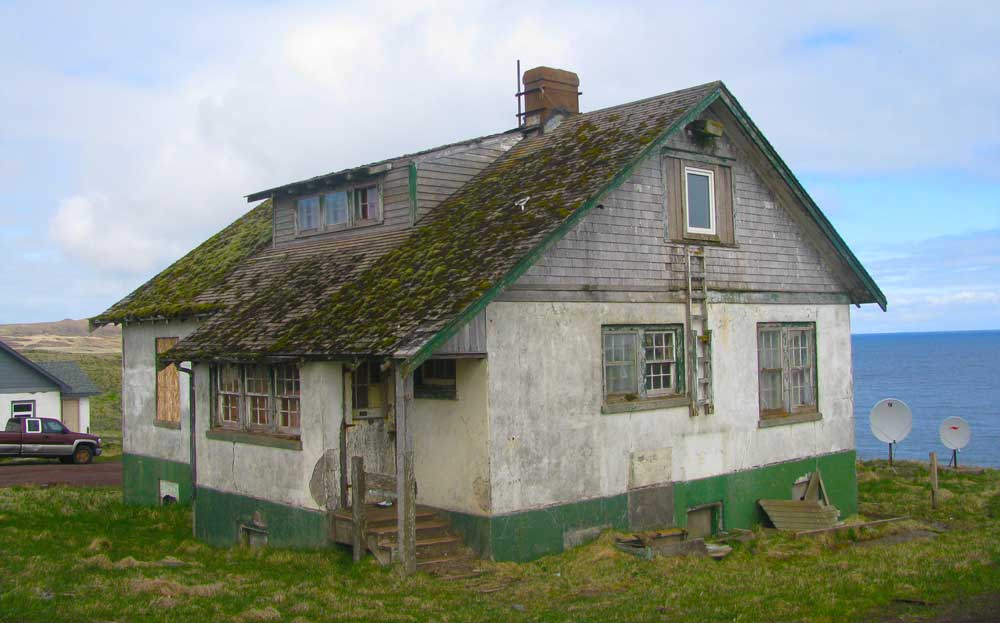 By the end of Lesson 4, you should be able to

Listen to  the vocabulary words and numbers  – Sound Lab Lesson 4  Tracks 1-2. Work on learning the words by sound and by sight. See also the vocabulary flip cards in the ‘Test Your Knowledge’ section.

Expand your vocabulary:  ‘the names of the months’

Once you have mastered the vocabulary given in this lesson, learn the following additional vocabulary, for the purposes of the exercises. The words can be found either in the Lexicon at the end of the textbook or in the Aleut Dictionary (Bergsland 1994); if you use the Aleut Dictionary, be sure to verify that you are using a word attested in the Eastern dialect:

To be X years old, to cost, dollar, to be expensive (to cost a lot), to be cheap (to not cost a lot); learn various items that can be bought, such as food items, furniture, houses, etc.

Listen to Sound Lab Lesson 4 Tracks 3-5 for this section.

Consonant clusters in Unangam Tunuu are found at the beginning of a word and in the middle of a word; they are not generally found word-finally, unless a final syllable has been dropped (or is not pronounced).

Word initially, the first element of a consonant cluster (known as C1) may consist of the following sounds; note that aside from s, these are all sounds that involve stopping the flow of air through the mouth before releasing the air (hence they are known as stops):

The second element (or C2) may consist of the following sounds; note that these are sounds that can be enunciated over a long period of time (hence they are known as continuants):

Some combinations are more frequent than others; thus t and s are by far the most common C1 of an initial consonant cluster, and x, ng, and y are very common as C2.

Loanwords from Russian have allowed a number of new consonant combinations, such as

In the middle of a word, we may find a cluster of two or three consonants (CC or CCC). In CCs, there are generally either two continuants or a stop or s and a continuant (in either order):

Some combinations are quite rare, as in xÌ‚x (huxÌ‚xix ‘rain pants’); conversely, in loanwords, and in syncopated words, other patterns of combination may appear:

If the above audio files do not work, download:
Track 6 .mp3 file here;

So far, we have focused on the forms that are most commonly heard in conversations. In this lesson, we will look at some less commonly heard forms, the 2nd person indicative and the 1st person conjunctive. They are less common because in general, in normal conversations, we typically talk about ourselves or about third parties, rather than about the person we are in fact talking to. However, in context, these forms are perfectly acceptable, and knowing how they are formed will help in understanding more complex grammatical structures in later units. We will also look at simple non-singular forms of nouns.

In Lesson 3, we saw how to form the 1sg and 3sg indicative:

To say ‘you are reading’, you simply add the ending txin to the 3sg form. Txin can mean several things; one of these is ‘you’:

Why is txin added to the 3rd person form? The 3rd person form is really just a default form. Historically, here is how scholars think the Unangan endings came about. The pronouns ting ‘I’ and txin ‘you’ used to be independent words; they gradually became so closely associated with the verb that they became person endings:

The 2nd person form is formed like other verbs, with txin: maqaÄil(a)kaxÌ‚txin.

In Lesson 3, we also saw how to form questions using the conjunctive. It is most common to ask someone directly what he or she is doing, or to ask about what a third party is doing, as in the following examples:

‘What are you doing?’

‘What is Peter doing?’

It is far less common to ask about what you yourself are doing. However, given the right context, you can hear 1st person conjunctive questions, as in the following examples:

‘Now what was I doing???’ (absent-mindedness)

‘What did I say?’ (parent-child dialogue)

1sg conjunctive forms include the personal pronoun ting after the conjunctive mood suffix:

Look at the following two sentences:

AlqutaxÌ‚ and alqutalix are very similar words, and they come from the same base, alquta- ‘what’, but they work differently. AlqutaxÌ‚ is used when the answer is a noun:

Alqutalix is used when the answer is a phrase or sentence:

Sometimes, because words, phrases, and concepts don’t translate exactly from English to Unangam Tunuu, this might not be obvious. Look at the following example:

‘How do you say ‘mother’ in Unangam Tunuu?

The simple answer to this question is usually anaadaxÌ‚. This is a shortcut. What you are really saying is:

‘AnaadaxÌ‚ is how it is said.’

That is why alqutalix is used, instead of alqutaxÌ‚. For now, you may have to just memorize phrases with these two words, but you can already start to figure out why one is used in some phrases and the other is used in other phrases.

The noun ending -xÌ‚, which we have seen on all nouns up to this point, indicates a simple, unpossessed, single thing: it is an ending that indicates singular number. When speaking of more than one person, place, thing, etc., older Unangam Tunuu made a distinction between dual and plural endings. The dual ending -x was used to denote two things; today, it is mostly used for naturally occurring pairs, such as eyes, ears, hands, and so forth:

The plural ending on simple, unpossessed nouns in Unangam Tunuu is —n; traditionally, this was used to denote three or more things:

The plural ending -n is much more often used now when referring to two things that are not naturally occurring pairs. It is not uncommon to hear something like the following:

The word aalax ‘two,’ has the dual ending; but the word tayaÄun has the plural ending. Although there are exercises provided to learn the dual form in this lesson, you may not always hear it.

It is useful to know how to count and how to talk about numbers, and groups of things; however, be aware that the expression of number does not necessarily translate exactly between English and Unangam Tunuu. For example, the sentence ‘my house has four windows’ may be better expressed as Sichin ukuuskan ulang kugan akun ‘There are four windows on my house.’ We will only practice very basic sentences with human subjects (e.g. ‘I have one house,’ or ‘how many books do you see?’).

Likewise, plural nouns in a sentence may have an effect on the verb(s) in that sentence; in fact, the rules of sentence agreement and pluralization are somewhat complicated. In the following exercises, plural nouns will either be found by themselves (that is, not combined with others, as in ‘apples’ rather than ‘apples and oranges’) or as the object of a sentence.

As in English, the noun modified by a number may be left out in casual speech. For example, if someone asks Qanaang kalikan chitaayalix ‘How many books is he/she reading?’ one could easily answer aalax ‘two’ or Aalax chitaayakuxÌ‚ ‘He/she is reading two (books).’

Finally, one very useful expression to know is sluxÌ‚talix ‘to be X years old,’ literally ‘to have X years,’ as in MariiyaxÌ‚ algidim atixÌ‚ sichin sluxÌ‚takuxÌ‚ ‘Mary is 24 years old.’

Culture notes : On number and counting in Unangam Tunuu

As mentioned before, dual number was much more commonly used in Unangam Tunuu prior to the 1950s. Today, in the speech of the Pribilof Islands, dual is especially still used for naturally occurring pairs, but much less with non-natural pairs. What constitutes a ‘naturally occurring pair’ is also culturally specific. For example, dual in Unangam Tunuu was also used to denote an object that has two symmetrical halves: achiking ‘my back’ (Bergsland 1994:53). Some old dual forms have had different fates in the different dialects; for example, the common expression for ‘parents’ in the Pribilofs is anaadaxÌ‚ amaya adaadaxÌ‚ ‘mother and father’ whereas in Eastern Unangam Tunuu from the Aleutian Chain, the old dual form anakin (dual of anaxÌ‚ ‘mother’) has been maintained.

As we see in this last example, a change in number may affect the intrinsic meaning of the word. This is true in many languages, including both English and Unangam Tunuu. Thus, the plural form of a word may refer to one thing made up of multiple subparts, such as ‘stairs’ in English. In Unangam Tunuu, the word for ‘nose’ is anÄusin, literally ‘nostrils.’ The word kalikaxÌ‚ is somewhat more complicated: kalikaxÌ‚ means ‘piece of paper’ to many speakers, whereas the plural form kalikan refers to ‘a collection of papers, a book.’ The same speaker may use the word kalikaxÌ‚ for either ‘paper’ or ‘book’ depending on the situation; likewise, different speakers (from a single dialect area) may preferentially use one or the other form for ‘book.’  As in English, some words are only regularly used in the dual or plural form (e.g. kalikan ‘book’ for some speakers).

The UnangaxÌ‚ counting system was originally based on a ‘vigesimal’ system, or a system based on 20, as with its relatives the Eskimo languages. Only traces of this old system are left in the records; for example, Attuan anguli(x) hatix ‘thirty’ literally means ‘without a half ten,’ or in other words ‘one half (of twenty) from the next twenty’ (Bergsland 1997:570). The first 10 numbers are still obviously based on the hands. In the following chart, the number 5 is derived from the word chaxÌ‚ ‘hand.’ Notice the symmetry in the construction of the numbers 1-4 and the derived numbers 6-9 (according to Bergsland (1997:485-6), -Vng means ‘the quantity of X in …’).

The etymology of many of these words is unclear, but there seems to be a clear relationship with the Eskimo system of counting, which used the hands and feet as units for counting. Thus, ataqan seems to be relatable to the root for ‘to be attached, connected’ (cf. atausiq ‘one’ from ‘adherence, what is indivisible’ in Inuit, Dorais 2010:145), and atixÌ‚ ‘ten’ may be from a root describing an outward or upward motion (i.e. the position of the fingers as stretched up or out, Bergsland 1994:570; cf. Inuit qulit ‘the upper part,’ Dorais 2010:145).

These exercises will be completed during synchronous class time and led by your instructor. You will  be graded on attendance and participation. Be prepared to participate in any of the following. If there are audio tracks, try to listen to the conversations before class time.

1.         Read the conversation out loud. Make sure you understand it both while reading and listening to it. Record yourself reading it.

[1]Read as Unangam Tunuu in the recorded version; absolutive endings are not infrequently used instead of relative endings in phrases in the everyday speech of the Pribilof Islanders.

Download the assignment file for this lesson (Google Doc),    complete, and upload the file to the Assignment Upload area for Lesson 4  in the UAF Blackboard course shell (https://classes.uaf.edu — log in with your UA username and password).

If you have problems with the assignments or with uploading the file, please contact your instructor right away for help.