Unangam Tunuu, also known as Aleut, or less commonly Unangam Agnaa, is the sole representative of the Aleut branch of the Eskimo-Aleut language family and was originally spoken from the Southwestern Alaskan mainland to the Near Islands along the Aleutian Chain. Speakers of Unangam Tunuu have inhabited the Aleutian Islands for thousands of years. In the 18th century, with the arrival of the Russians, Unangan speakers were brought to the Commander Islands (in Russia) and the Pribilof Islands (north of the Chain), where new Unangan communities were established. Today, there are also small pockets of speakers in urban areas such as Anchorage, Seattle, and Fairbanks in the United States, and PetroPavlovsk-Kamchatka in Russia. As a result of enforced language replacement policies and relocation during and after World War II, both in Russia and in Alaska, the language is highly endangered today, and most speakers are quite elderly. There have been many efforts to maintain and revitalize the language since at least the 1970’s, however; this course is the result of one of these efforts. The variety of Unangam Tunuu represented by these lessons is spoken on the Pribilof Islands; this variety is little more than 200 years old, and it shares many features of both Eastern and Atkan Unangam Tunuu, but it is nevertheless unique, distinct from both, and innovative in many ways.

Unangam Tunuu is unusual in many ways, but most especially in the following ways: 1) like the Eskimo languages, it is polysynthetic, meaning that words, particularly verbs, can be quite complex; and 2) the system for marking agreement between nouns and verbs has evolved to be typologically unique in the languages of the world. Neither of these two characteristics is introduced in this introductory course, however.

Many Elders participated in the creation of these materials. Special thanks are due to Father Paul Merculieff and Susie Merculief, both originally from St. George Island, and Mary Bourdukofsky of St. Paul Island. All three contributed both to the creation of the exercises and to the audio files for these lessons.

This online course was prepared by Prof. Anna Berge of the Alaska Native Language Center based on her textbook and accompanying audio files (Pribilof AnÄaÄigan Tunungin / The Way We Talk in the Pribilofs). 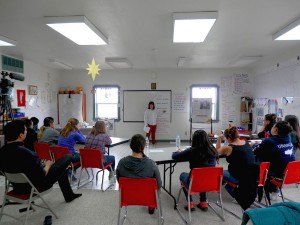 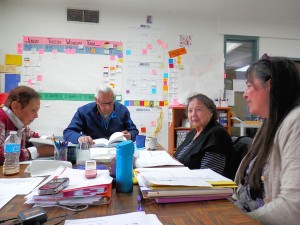 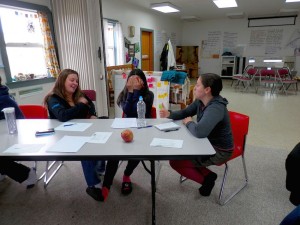 This course is offered for credit through the Interior Aleutians Campus (IAC) at the University of Alaska Fairbanks.  For more information, please visit the IAC website or call  (888) 474-5207/ (907) 474-5439 or contact your rural center.

Many thanks are due to the Unangan Elders who worked with Dr. Berge and provided the data, and in particular, to Father Paul Merculieff, Susie Merculief, and  Mary Bourdukofsky, whose voices are found in the recordings for these lessons.   Many thanks also are due to the students and assistants who helped process the recordings, including especially Anna Clawson and Aric Bills.   The Unangan communities and community members of St. Paul and St. George, as well as Aleutian/Pribilof Islands Association provided help, advice, and in-kind support for the research.

This material is based upon work supported by the Alaska Native Language Center (University of Alaska Fairbanks) and by the National Science Foundation under CAREER Grant #0349368 and Grant No. 0807245.  Online class resources were developed through US Department of Education, Office of Postsecondary Education Title III Alaska Native/Native Hawaiian Strengthening Institutions grant P031N100007.